Ali Stunt, our founder and CEO, celebrates her 12 year survivor anniversary since being diagnosed with pancreatic cancer in 2007. Here she shares her story of how she was inspired to set up Pancreatic Cancer Action.

Exactly this time 12 years ago I received the news I had a mass on my pancreas. This mass turned out to be pancreatic cancer, something I’d not heard of before that moment. I, in 2007 was facing a 3% 5-year survival rate and, at the age of 41 with two young boys, this was a terrifying prospect.

I was lucky though to be diagnosed in time for surgery. And that, followed by chemotherapy and chemo-radiotherapy, has enabled me to ‘beat the odds’ and push through the 1% surviving beyond 10 years barrier.

It was once I got better that the enormity of what I had gone through hit me and when I reached that all so important 5-year milestone, I began to believe it was possible that I could survive even longer.

Some have said to me “why did you set up Pancreatic Cancer Action as it means you are constantly surrounded by the disease that you have fought. Surely you want to draw a line and move on with other things?” 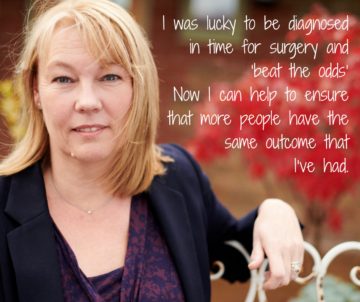 Well, I felt at the time and still do that what is most important is that I try to ensure that more people have the same outcome that I have had. That it shouldn’t be either a case of luck, circumstance (or both) that affords an earlier diagnosis. The rationale for me setting up Pancreatic Cancer Action is as true today as it was in 2010.

What is heartening is that although we still have a very long way to go, the 5-year survival rate has increased to nearly 7% now and fewer people are diagnosed as an emergency in A&E.

We have examples of how our awareness campaigns and occupational health talks have actually saved lives which is something that gives me goosebumps. We know that more GPs have taken our e-learning modules and our GP Aware campaigns are helping increase the number of people referred to specialists by GPs and people referred this way survive longer.

Our work with pharmacists and pharmacy teams has been received so well and we are making an impact not only in improving the knowledge of these healthcare professionals, but they are helping us to raise awareness with the public too with the pharmacy Turn it Purple campaign.

We haven’t had millions to spend on research (I wish!) but we have spent over 200,000 GBP on small projects focussing on improving early diagnosis of pancreatic cancer; two of which have gone on to receive significant funding (in one case over 2 million) to continue on.

There is lots more to do though and while I am still in good health I will continue on through Pancreatic Cancer Action and the amazing team that works with me to increase early diagnosis of pancreatic cancer so more survive longer. 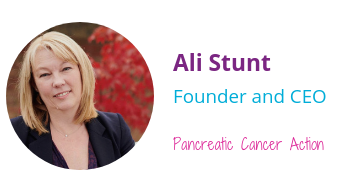