We therefore welcomed the news last week that nab-paclitaxel (brand name Abraxane®) has been approved by the Cancer Drugs Fund as a treatment for metastatic (cancer that has spread to other parts of the body) pancreatic cancer. The committee have listened to us and come to the correct conclusion – that eligible NHS patients in England will have access to this novel therapy.

Abraxane, in combination with gemcitabine has, in clinical trials shown to increase survival by two months on average, but some patients in the trial have benefitted from up to two years’ survival. This is very encouraging for advanced pancreatic cancer patients. 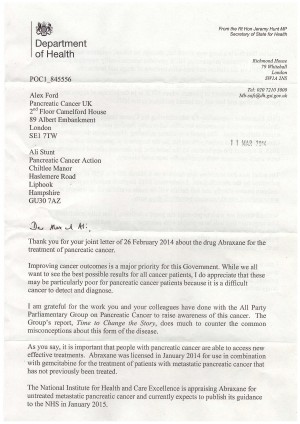 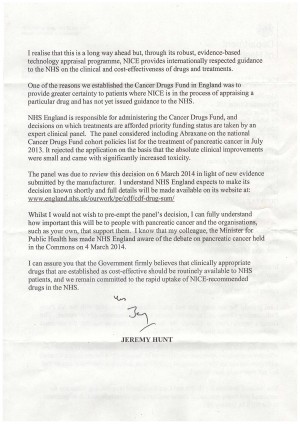 The tireless of work of many to campaign for this approval has paid off.  This included a letter of appeal to Health Secretary, Jeremy Hunt written jointly by Pancreatic Cancer Action and Pancreatic Cancer UK and signed by Members of Parliament. Ali Stunt our Chief Executive attended the Cancer Drugs Fund meeting on March 6th to support the application to have Abraxane® included on the list. Of course, our recent advertising campaign – the very first of its kind in the world has significantly lifted the profile of pancreatic cancer in the UK.

Historically, there has been very little hope for pancreatic cancer patients with most surviving for only 4-6 months from diagnosis. Additionally, significant underfunding for pancreatic cancer research has meant that there has been very little in the way of improvements in survival for these patients for decades. Therefore, it is only right that eligible patients should have immediate access to this medical advance.

It has been suggested by many people who we have spoken to since the decision was made that our “I wish I had…” advertising campaign leading up to the Cancer Drugs Fund (CDF) hearing helped Abraxane® achieve inclusion in Cancer Drugs Fund list this time round. The scoring system the CDF uses rated Abraxane® exactly the same this time as it did when the first application to have it included on the CDF list was refused mid-2013.

The outcome of the CDF decision is brilliant for all patients and we at Pancreatic Cancer Action are so pleased that eligible patients in England now have this option to enhance their lives, from two months to, in some cases, over two years.

What we would like to see now is approval of Abraxane® for metastatic pancreatic cancer by the Scottish Medicines Consortium, NICE and, AWMSG (Wales), NCPE (Republic of Ireland) so all eligible patients across the UK and Ireland will have access to this drug.