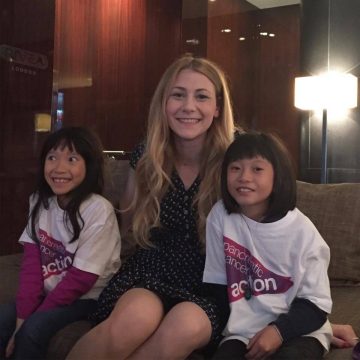 9 year old Audrey from Singapore, first heard about our charity from one of her teachers, Steve Delargno, at St Joseph’s Institution International Elementary School, Singapore.

Steve wears a PCA wristband in memory of his mum and Audrey took a liking to it because of it’s colour and kept asking if she could have one. Eventually, Audrey got her own wristband and decided to raise money for us by making and sending out a video. Audrey managed to
raise an incredible £1,390 for Pancreatic Cancer Action!

(Read the full story and watch the video here)

A couple of months later Audrey’s dad, Kenny Li, got in touch saying that they were visiting London for a few days over their Easter break and Audrey would love to meet us and hand over some more money she had raised.

So l hopped on a train to London excited to meet the lovely Audrey who I had heard so much about. When I 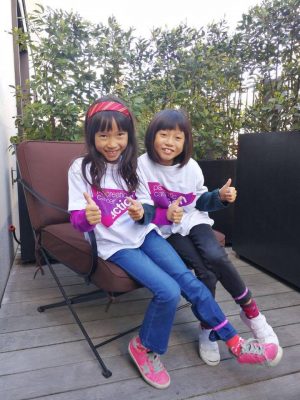 arrived I was astounded when Audrey handed over another £2,560, making the total raised almost £4,000!

Audrey was an absolute delight and when asked what she wanted to do when she grew up she replied: “I want to make the world a better place. To spread joy and kindness and happiness. I want to be significant, not famous.” After pausing and thinking a little she added: “Also, a ski patroller!”

Audrey’s sister Kendra, 7, was also there and has decided to follow in Audrey’s footsteps. Since their visit to London they have written thank you cards to there supporters and sent them supporter packs to say thank you. (See pictures below)

If you have been inspired by these lovely girls click on the links to find out how you can fundraise and raise awareness for Pancreatic Cancer Action!