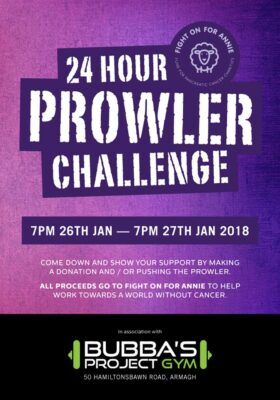 Gráinne O’Neill, from Armagh, is helping with the incredible 24 hour challenge of constantly pushing a Prowler in Bubba’s Project Gym. The owner, Bubba, approached Gráinne with the fundraising idea of himself and 5 others to take on the enduring task to help raise funds and awareness of the UK’s fifth biggest cancer killer – pancreatic cancer.

Gráinne’s mother, Anne, was diagnosed with inoperable pancreatic cancer in June 2013 and was given between 4 and 6 months to live. Anne fought the disease for seven months, she was determined to beat pancreatic cancer and remained positive throughout her battle. Unfortunately, the cancer was too aggressive as it was stage IV which meant that it had spread from her pancreas to her liver, lungs and back. Anne passed away on 30th January 2014 aged only 54.

Gráinne went on to set up a charity fund called Fight on for Annie to raise funds and awareness of the disease locally to help with early detection. £45,000 has already been raised which will be split between Pancreatic Cancer Action and Pancreatic Cancer UK.

Gráinne says “We have decided on this challenge because the prowler represent a lot of things: the cancer patient getting the distressing diagnosis, pushing through the pain of their treatments, constant needles, surgery, maybe hearing that their treatment isn’t working, the worry and fear about their future being uncertain.

By coming down, donating &/or pushing the prowler for a few minutes you will raise money and show your support to all the cancer patients, cancer survivors, cancer angels & families affected. As well as showing that we are united, fighting for a world without cancer.”

To support Gráinne you can donate here