2020 marks the 10th anniversary since I founded Pancreatic Cancer Action and, in those humble days,10 years ago, working alone in the back bedroom of my home, I could only dream that PCA would become the organisation that it has today.

My ambition remains the same, as it did back then, that more people are diagnosed with pancreatic cancer sooner, in time for surgery to be possible. This is what happened to me, but it was more a matter of luck and circumstance that afforded me the early diagnosis and, once understanding the statistics of this disease, I discovered that chance isn’t something one can rely on to get diagnosed early.

In this blog, I reflect on some key moments in the past ten years which give just a snapshot of all the incredible things we have achieved at Pancreatic Cancer Action, which of course, would not have been possible without the help of our truly outstanding #TeamPCA supporters.

Why set up another charity?

Once I knew that only 10% are eligible for potentially curative surgery, survival rates (3% to 5 years in 2010) had not changed in over 40 years, most are diagnosed late and nearly half have to resort to presenting to A&E before they get a referral, and the fact that at that time the newest pancreatic cancer chemotherapy drug was 20 years old, I had to act.

So, I founded Pancreatic Cancer Action. It can be tough, very lonely and maybe a bit crazy to start one’s own charity when there were already two other organisations on the scene. However, they were excellent at doing patient support and funding research but were not focussing on what mattered to me: early diagnosis and raising the profile of pancreatic cancer among the public and medical professionals, particularly GPs.

Catching a break and putting Pancreatic Cancer Action on the map

I got a break when the Telegraph picked up my story and did a feature article on me and the founding of PCA. After that, I got calls and emails from people who wanted to support the charity and to help in the mission to improve early diagnosis.

Campaigning has always been something I wanted to do. I had the ambition to use advertising to raise the profile of pancreatic cancer as well as the surrounding issues that the public and policymakers needed to know about. However, there was no way we could afford it. This changed in 2013 when I met the lovely Greg Phitidis whose aunt Marie Helene Way, I had got to know through her having pancreatic cancer.

Greg was a creative director of an advertising agency and offered to help by developing the creative for a hard-hitting advertisement and arranging for the shooting of the stills. Out of this came the I Wish I Had… campaign. Where we compared the outcomes for people who had cancers other than pancreatic cancer. It is something that both me and Marie-Helene had thought following our own diagnoses of pancreatic cancer. For extra integrity, we used real patients, Kerry, Andy and Penny as the faces of the campaign. Sadly, only Penny is still with us today.

It was hard-hitting and controversial but we raised a huge amount of awareness – reaching a staggering 20 million people all over the globe – and people still talk about ‘that’ campaign to this day.

From my laptop with no design software I created the very first UK leaflet on pancreatic cancer and printed my first batch on a home office printer and took them to a stand I had organised at Ashford & St. Peter’s hospital Chertsey where my own Consultant surgeon and PCA Trustee worked.

I then progressed to writing, with the help of clinicians, a set of modular patient information booklets. I had nothing when I was diagnosed, so I was determined that patients (and their carers) in the future would have easy to understand but clinically evidenced booklets that they could read at whatever stage of the patient journey they were at.

Aside from assuring good quality patient information, it was also a key priority to ensure the medical profession had access to resources and educational materials to help them diagnose pancreatic cancer sooner. So, in 2012, with the help of specialists, Pancreatic Cancer Action produced the world’s first e-learning module on pancreatic cancer. We wrote it for GPs alongside the Royal College of GPs then wrote another module for hospital doctors with the BMJ. 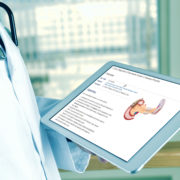 The feedback we have had on these modules is tremendous and, by using technology we can reach far more GPs more cost-effectively than inviting them for seminars.

In 2018 we launched the very first e-learning module for pharmacists and pharmacy support staff. We also created resource packs for pharmacists and have encouraged them to get involved in November Turn it Purple campaign, creating a TIP Pharmacy of the year award.

We have created a whole section specifically for healthcare professionals on our website, take a look!

Campaigning for change and equality

Unfairness is something I despise, especially among pancreatic cancer patients who with their diagnosis have already been dealt a rotten hand. So, when patients in England couldn’t access the drug Abraxane on the NHS despite it being available in Scotland & Wales, we launched a campaign with the aim of getting the Department of Health and NHS England to reinstate this life-extending drug for the treatment of advanced pancreatic cancer that had been removed from the Cancer Drugs Fund.

This involved a powerful advertising campaign which featured patient; the lovely Larry Rees and the PCA team and our supporters demonstrating outside the Department of Health. We are pleased that the decision to reject Abraxane was overruled and it is now available for advanced pancreatic cancer patients in England.

This year our focus will be working with other organisations to call for specific policy targets for cancers with vague symptoms, like pancreatic cancer. To find out more about our current campaigning, click here.

Last year we launched the very first awareness campaign for pancreatic cancer targeting the public, GPs and pharmacists at the very same time. The campaign, launched in Northern Ireland, has been very impactful and something we wish to repeat in other regions across the UK.

Recently, a patient told us that she was diagnosed early with pancreatic cancer after recognising her symptoms on one of our Pancreatic Cancer Aware posters. Something that still sends goosebumps that an initiative we have had has saved at least one life. 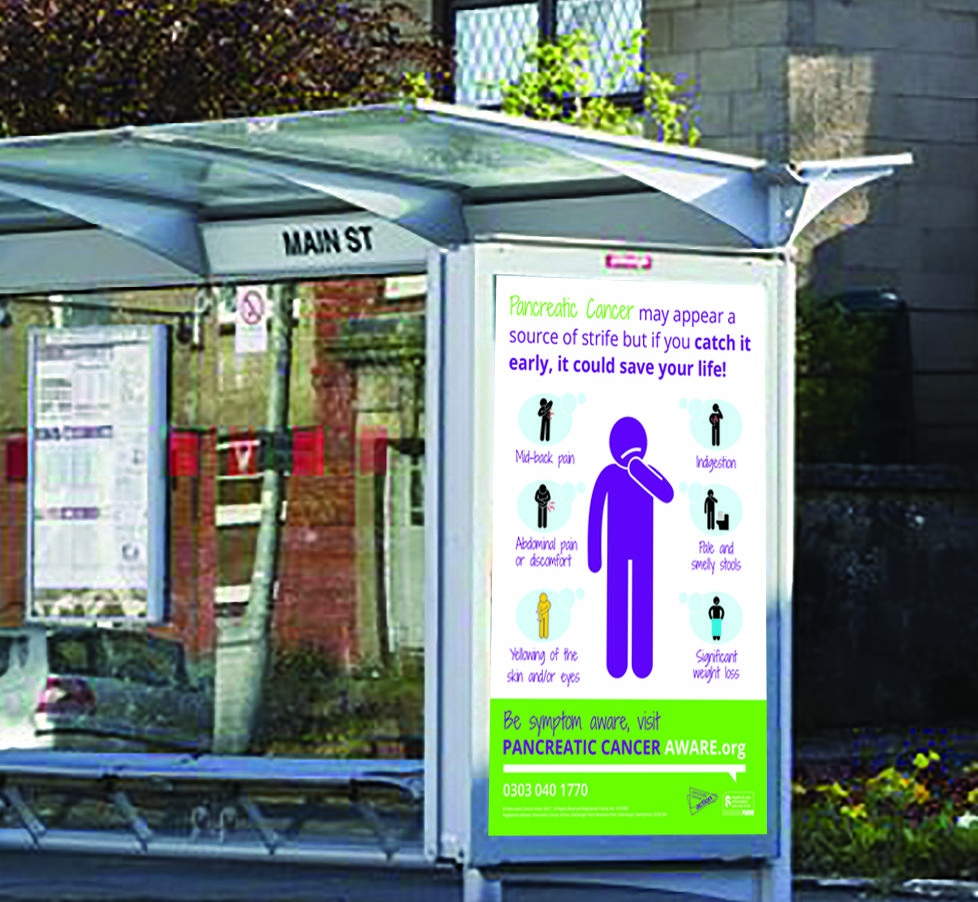 We need your support to take our regional campaigns national. Find out more here.

We have also pumped nearly £300,000 into small proof of concept research projects as part of our Early Diagnosis Challenge Award scheme. Our intention was always to use these projects as a springboard to further and larger funding, which we, as a small charity cannot provide. I am proud to say that two of our projects have gone on to secure millions of pounds of further funding and I really hope that our seed funding has gone some way to improve early diagnosis of pancreatic cancer.

Here’s to the Decade of Change for pancreatic cancer!

PCA has grown exponentially in the last ten years and we hope that will continue across the next decade. We now have an office and I have a team of 13.

I am immensely proud of my fantastic team who are as passionate as I am to change the numbers for pancreatic cancer and of course our wonderful supporters without whom, nothing would be possible. 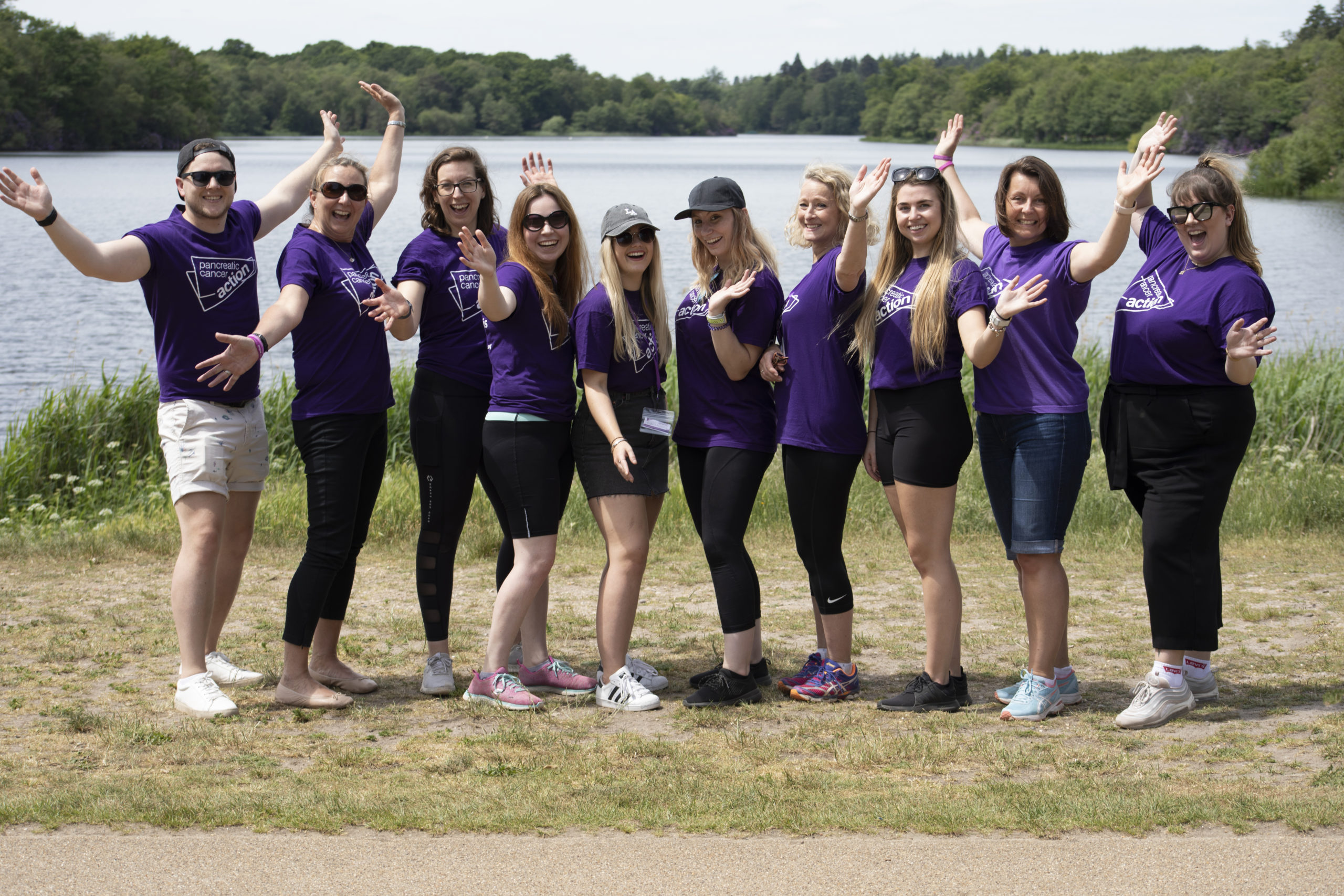 I would like to thank all the patients and families who have been in touch to tell their stories and to support what we are doing at PCA. Some of whom became friends before we lost them to pancreatic cancer – something which is very difficult for myself and the team.

I would also like to thank all our supporters, donors, community representatives, my team, my Board of Trustees our clinical specialists and my long-suffering family and friends for helping make this all possible and for continuing to be by my side as we enter the next decade.

We’ve come a long way and we have seen the survival rate change from 3% to nearly 7% in the past 10 years. However, this is not enough and so much more needs to be done. I hope you can join us to make the 2020’s the Decade of Change for pancreatic cancer.  A decade where we will see early diagnosis increasing and survival improving and also the quality of care and treatments for patients to be better than ever. 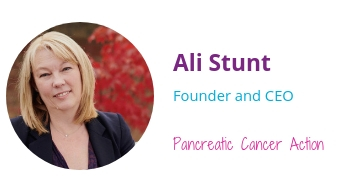